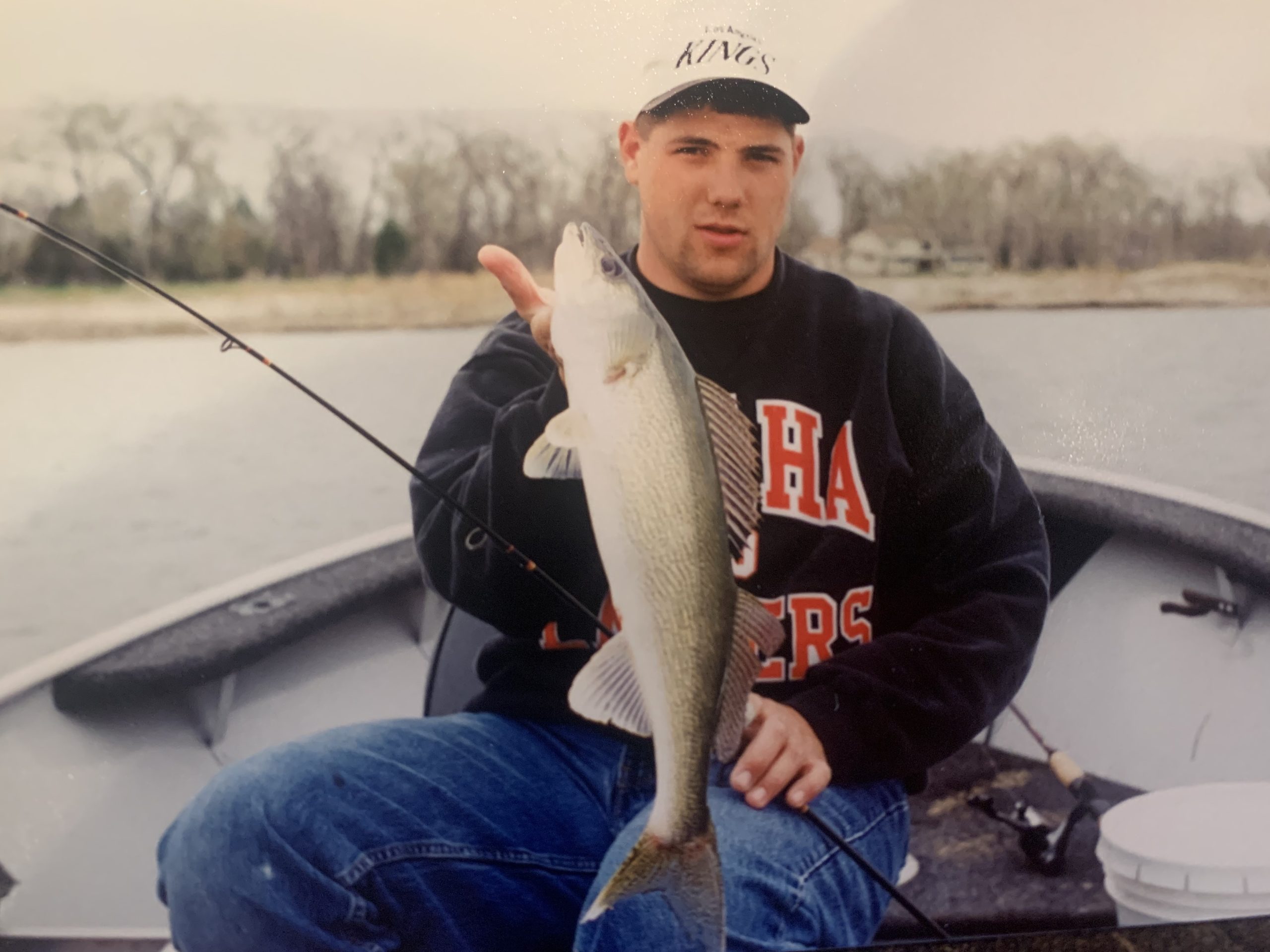 CALL MIKE TO BOOK A TRIP

I’ve been thinking about writing an article about this for a long time. My personal history on this body of water would basically start back in 1975. This is the year my parents decide to move to Bismarck, ND for work.  When they were considering coming to North Dakota, they (probably more my dad) looked at a map to see what was near Bismarck.  Seeing a river and a big body of water to the north my pops said there has to be some good fishing and hunting around there. So, here’s my little walk down memory lane! I hope you enjoy it as much as I’ll enjoy sharing these memories with you.

Upon arriving in Bismarck my dad was shocked to find out not many folks fished the river.  He was told it was treacherous and hard to get around and it had lots of current.  I think all those factors were even more of a reason to try and figure it out.  As luck would have it, dad met a former photographer for the ND Game and Fish Ed Bry through hockey.  Ed’s kids played hockey and dad had moved here to coach hockey and run the one hockey arena in town.  Ed told him a few things about the river and I believe took dad out a few times to show him how they approached it.

In 1975, here in Bismarck, there was only one real boat landing and that was Fox Island.  The rest were just sandbars.  I do remember putting our boat in as a kid on a sandbar just across from what is known as the Little Heart, the end of south 12th, and what is now known as Kimball Bottoms.  We thought we died and went to heaven when Sibley Park was opened and a boat landing was opened there.  So very few people were actually fishing back in those days.  If you saw another boat on the water, you probably knew who it was.  If you saw multiple trailers in any one place it was overcrowded. How times have changed…

I still remember vividly, my very first walleye we caught in a boat.  I was only like 4 years old but dad bought a 16-foot Lund and we ran down to a spot near the prison property just south of Fox Island. I remember staring at these fish on the stringer in the water.  I was so mesmerized by them, and I guess in a weird sort of way, I still am!  Who knew 40 years later I would be writing this article and be a full-time fishing guide.

As the years piled up and the boats changed to bigger boats for us, so did my love for fishing the river. I was an absolute terror at school.  We lived right across the street from Roosevelt Elementary in Bismarck.  It got so bad the teachers had to call my mom in to tell her my dad cannot move the boat from the driveway while I was in school.  If it moved and I thought he went fishing without me, it was my mindset to make everyone around me pay.  I’m so sorry to anyone who got into my crosshairs back in those days.  It was like I was possessed.  Couldn’t stand not being able to go, I just didn’t want to miss anything.

My passion to fish kept growing.  In fact, it got so bad around the age of 12 that my dad finally figured it would just be best to let me go on my own.  I did have a fishing partner and best friend growing up Ryan Thompson, who was always with me on these fishing trips. Dad would bring us to a ramp, tell us to put our lifejackets on, back us down the ramp, and tell us what time to be back at the ramp.  For us, this was the best life ever!  Every day in the summer and every day after school, no matter what the conditions, we were on the water.  You sure learn a lot by just doing it this way.  Lots of failures, but also lots of success.  We were mastering the art of pitching jigs.  I don’t care what anyone says, but Ryan and I were definitely some of the first to do this religiously on the river.  We had plenty of tournament wins to prove it.  The best part was we didn’t care how many boats we would fish by.  When we pitched jigs under their boats, we would catch the fish and they wouldn’t.  We would giggle under our breath because people just couldn’t figure it out.  It was the single most advantage we had over everyone.  Not to mention we fished every day and knew exactly where the fish were.  A huge advantage to us!

Speaking of some of those early wins on the river.  Many of them were local bar tournaments like the Whiskey Point Saloon.  We actually use to make my dad go and register us to fish.  When we would win, he would have to go to the bar and collect the money for us because we were far from old enough to go.  Another favorite of mine where we collected 4 plaques was the old Y-93 late summer tournament.  They finally told me not to fish it anymore because people were grumbling about us fishing it.

It’s interesting to me to reminisce back to the early river days.  I remember it like it was yesterday when the MWC Championship was held here in 1986.  Dad and I were headed out to fish the river after school.  It started to rain and we pulled into the Holiday gas station off Expressway.  I remember seeing this 16-foot Lund tiller sitting in the parking lot.  I stayed in the truck while dad ran into the gas station for what I assume was a pack of cigs.  As he was coming out, he stopped and chatted with the two guys that were in town pre-fishing for the MWC.  I didn’t care because I couldn’t take my eyes off that awesome Lund tiller I was so fascinated with.  As luck would or fate or whatever you want to call it would have it.  Dad gave them his number and told them to call him if they were struggling.  Sure enough, the phone rang, and Dad went out with the eventual winners of that event Bruce “Doc” Samson and Jerry Anderson.

We became lifelong friends and Doc would always make an annual trip to Bismarck every fall to fish with us. I’m not sure if there were rules against it back in the late 80s or not, but Doc was the one who introduced me to creek chubs on this river.  He would bring them with him on those annual fall trips and man did we destroy the big fish.  I figured it out early on that in any tournament I was able to fish on the river, if I can find creek chubs I was going to do well.  My mission to find creek chubs led me all over the place, and I did find a small creek right in town where I could usually muster up enough.  Again, I kind of giggle with the creek chub craze guys have now.  I feel like that has come full circle after guys started to figure it out.  I’m thinking of using them back in the fall of 1987, we were probably early to the creek chub craze.

I think some of the reason I wanted to write this article is because of all the ups and downs we are currently seeing with huge walleyes and low water.  I feel I’ve been through all of this a few times now. I prayed I’d never see this extremely low water ever again.  Especially down in Oahe, but we are living it all again.

I have seen this river go from where no one was fishing it to overcrowded.  I’ve seen it go from huge average walleyes, to where if you caught an 18 incher, you were pumped.  I’ve seen 10 fish walleye limits to 5, and massive smelt runs.  Speaking of those smelt runs, man they were so fun! We use to go down to the Hazelton boat ramp right to the north of it and net them with Ed Bry and his kids Bobby Bry and Tom Bry.  We would fill 5-gallon buckets full, with very little effort.  I remember when the Game and Fish implemented a one over 18” slot on the river.  So many people will argue with me that we never had slots here.  We did!  My favorite is when a young pup tells me he was mad cause he saw me fishing in one of his spots. This makes me shake my head a little.  I feel like telling them I’m sorry, I fished that area long before you were even in diapers. It all goes with the territory of getting older.

The best part of all these young guys fishing now, is they will someday understand how I and a few others probably feel.  The one thing I can guarantee is all these young anglers on this river.  This will all cycle again and again.  It’s the nature of the river.  It’s a good thing and it’s also a hard thing to handle.  You always want it to stay in the moment, especially the moment it’s in right now where you honestly have a shot at a big fish every time out.  This shall pass and we will have to wait for it to cycle back again. 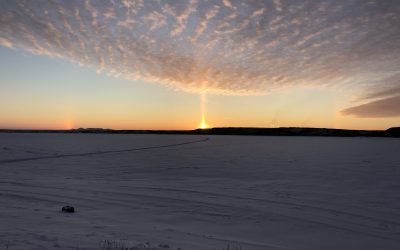 I don't want to put the cart out in front of the horse, but ice fishing has started. I should be talking about the... 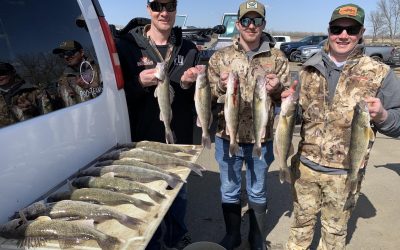 I get asked all the time what it is like to be a guide. Some of the questions I get on a daily basis are, how do you... 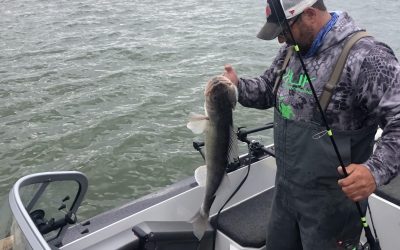 I was recently on the Review Your Gear Podcast and the question came up about the rods I have exclusively been using...